When the call came in to the Chautauqua County, New York, Sheriff’s Department that a dog had been hit by a car, Sergeant Chris Howlett quickly rushed to the scene.

Sergeant Howlett found the injured dog lying near the road in a snow bank.  He quickly removed his jacket and covered the cold dog as best as he could to try to keep her warm and from going into shock.

The kind officer then sat and comforted the dog and tried to reassure her that she was not alone and help was on the way.  The dog was soon transported to a local veterinarian for treatment.

Fortunately, the dog was found to have only minor injuries and would survive her accident.  Her thankful owners were notified and updated the sheriff’s department that their dog, whose name was Rogue, was going to be okay and able to return home from the hospital soon.

The update from the Chautauqua County Sheriff’s Department read:

“The family has reached out to provide an update. Her name is Rogue and she is being evaluated by Veterinarians. She is doing well and hopefully we will back home by Monday. I am sure the family has greatly appreciated the outpouring of support from everyone.”

The Sheriff’s Department posted a picture of Sergeant Howlett comforting Rogue which warmed hearts far and wide.  It was wonderful that a good samaritan reported the accident and officers were able to help the poor dog before she froze to death in the snow. 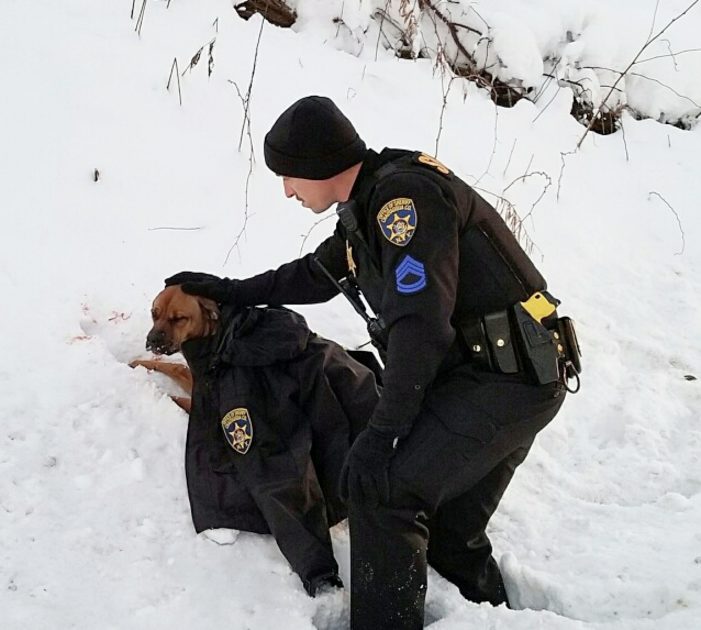 What you read in 2021: The diver later said he “probably shouldn’t have been swimming with” the shark.

50 Funny And Spot-On Recreations Of Old Photos, As Shared In This Group

Golden Tortoise Beetle, One Of The Most Striking Beetles That You...

admin - 12/09/2021
0
The golden tortoise beetle is a striking arthropod. These tiny creatures look like little specs of gold with legs.   Weird Facts About Dung Beetles and...