Bees are well known as “pollinators,” meaning, they assist plants to live and reproduce by transferring pollen between different species of flowering plants, mainly like flowers. They usually carry pollen on their legs and body from one flower to another, helping to create what’s considered as “genetic variety” by distributing various genes throughout many plants and flowers. 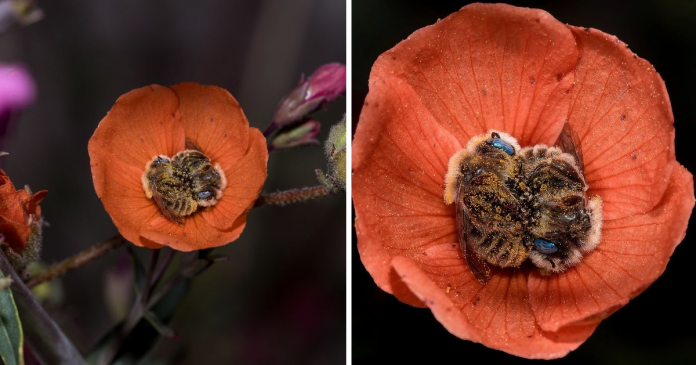 Bees are usually, entirely interdependent on flowers for food, which consists of pollen and nectar. It can be later modified and stored as honey. As bees fly from flower to flower gathering small amounts of pollen, this amount is rubbed from their bodies and deposited on the flowers they land on. This loss of pollen is significant, for it often results in a cross-pollination of plants.

This article is about an adorable bee species that Joe Neely came across. They seemed to have been snuggling together. The story behind this discovery was when he and his wife went out to capture a bunch of poppy flowers by the highway.

Suddenly, his wife was captivated by an orange Globe Mallow plant which gave out small buzzing noise, and turns out, there were bees inside these flowers who were not moving.

According to the United States Department of Agriculture, the forest service stated that these bees belonged to the species of “Diadasia diminuta” and that their nests are usually found in compacted soil along dirt roads.

Talking with team “theinfo.me’ Joe Neely mentioned that “This photo is also in the National Geographic Magazine this month (November 2021) issue”.

The skeleton of a man with a nail through his heel has been found in a settlement in a village in Cambridgeshire.

I’ve Learned That Love Has Many Shapes

15 Winners Of The Northern Lights Contest By “Capture The Atlas”

admin - 12/25/2021
0
Nature is a beautiful place and in these hard times when everything seems kinda sad and dull, it’s always nice to look at some...